You have probably heard your cat emit a fast and intense teeth chattering- especially when they spot a bird while gazing out of a window. Behaviorists speculate that this is because your cat is frustrated that they cannot get outside to hunt prey. They also may be excited and slightly aggravated.

Others say that this strange jaw movement may be your kitty’s natural instinct that allows their muscles to prepare for the act of killing prey. Either way, this behavior is completely normal for your feline. When your kitty rubs his head on you, he is doing more than just showing you affection and saying hello. He is actually doing something that behaviorist’s call “bunting”. Pheromones are actually being released from his head and it is his way of showing ownership over you. Just as a cat would rub on furniture to leave his scent to mark his territory- he is showing pride in that you are his.

Behaviorists have a few theories on why your cat is persistent in his pursuit of leaving you their kills. Even though this habit may be perceived as a gross one- your kitty is acknowledging you as a member of his group, and is sharing his hunting success with you. He could be thanking you for taking care of him or perhaps you pay more attention to him when he generously brings you rodents, birds, or insects.

If this is a behavior you would like to curb of your outdoor cat, try putting a bell on his collar so that it is more challenging to hunt.

Does your cat enjoy chewing on non-edible items such as wools, cloth, inedible plants, plastic, or metal? This could be a sign of a rare condition in cats called pica. Often the cause of this is unknown; however, some proposed reasons include mineral deficiencies, anemia, hyperthyroidism, genetics, boredom, and stress.

If your cat is showing symptoms of pica, it is time to have a full examination by a veterinarian in order to rule out any underlying problems. Treatment may include dietary adjustments, placing bitterants, such as “Grannicks Bitter Apple Spray” on the chewed objects, providing multiple small meals throughout the day rather than one or two large meals, providing stimulation through games, social interaction, and alternative chews.

When your cat presses his paws into you, and massages back and forth- this can be a rather enjoyable feline behavior. Your kitty’s instinct to do this traces back to their earliest days of nursing. By pressing his paws on his mother’s mammary glands, it encouraged better milk production. When your cat does this as an adult he is either content, and showing that he is happy, or he is trying to alleviate stress and the habit is one to calm him down. Either way, take it as a compliment that you remind him of his mommy!

Cat’s ability to fit themselves “comfortably” into tight spaces never ceases to amaze, or entertain us for that matter. There are plenty of comfy places they could rest instead, like say that cat bed you purchased them. So why do they choose to curl up in boxes, bathroom sinks, small baskets, etc.?

Small spaces make your cat feel safe and secure. If they were out in the wild, they would not want to be unprotected in an open area because this would make them more susceptible to predators. Felines also have a natural instinct to ambush. By hiding in small tiny spaces they are able to watch and observe their surroundings from a distance.

One minute your cat’s eyes are glued on you, the next he seemingly wants nothing to do with you. So what gives?

When your cat is staring you down he is probably just trying to get your attention. If the stare is intense, this “staring contest” could mean that he is on high alert about someone or a situation. It is advised to not look at your cat directly in the eyes. As with any animal, cats see this is an act of aggression in preparation for a fight. 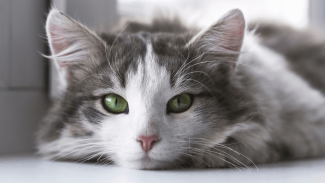 Have you ever noticed your kitty slowly blinking at you? Behaviorist call this act “kitty kisses.” These slow blinks are your feline’s way of showing affection and telling you that they like and trust you. If you blink slowly back at them, they most likely will continue to blow “kitty kisses” your way.

Other times you couldn’t get him to look at you if your life depended on it. Just like humans, cats appreciate alone time. When he needs some quiet solitude, give him his space. This will strengthen his respect for you and don’t worry- he will seek you out when it’s cuddle time!

Urinating or defecating outside the litter box, known as inappropriate elimination, is the most common behavioral complaint of cat owners. Understanding the underlying causes of this condition—and how to treat them appropriately—can help ease the frustration and rebuild the bond between cat lovers and their feline friends.

Inappropriate elimination can be caused by medical or behavioral issues. The first step in finding a cause for inappropriate elimination is to see a veterinarian.

While many cat owners believe their feline friends are “misbehaving” when they urinate or defecate outside the litter box, more often than not, the cat is simply trying to avoid a painful trip to the litter box. For more information about inappropriate elimination, you can read more here.

Don’t you just love when you’re fast asleep and you’re jolted awake by the sound of your cat barreling down the hallway?  Or fluffy is yowling away while you’re trying to get a good night’s sleep? Most house cats have an enormous amount of energy that is pent up during the day and needs to be released. This combined with their nocturnal instincts to hunt during the night may wreak havoc on your sleep.

We recommend regularly exercising your cat during the day in order to avoid random sprints throughout the house in the middle of the night. You can also try feeding him right before you go to bed, and to curb the desire to hunt at night you may want to try providing her with food puzzles to keep her engaged while you snooze.

If your excessively vocal cat is a senior, this could signify a serious, yet treatable condition. We recommend that you book an appointment with your vet if this is the case.

If you notice that your kitty’s ears are twitching back and forth- it’s time to slowly back up. This is one way that they express anxiety or agitation. However, if their ears are just slightly pointed upright, this means that they are alert and simply listening intently to their surroundings. Rolling around on their back leaves them in a vulnerable position, so if fluffy is doing this in front of you- take it as a compliment! He feels safe around you and you have earned his trust. A roll on the floor means that he is trying to engage you in a little play time.

Magazines, laptops, books, clothes you’ve laid out, you name it- your cat loves to lay on it at the exact time that you’re using it. Your kitty knows if he plops himself down on whatever you’re paying attention to- chances are, he will get some affection. 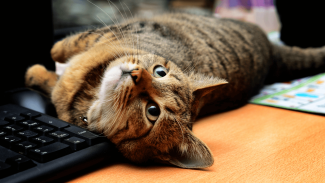 He is also leaving his scent on your belongings, as a way to claim his territory that you are indeed his.

For no apparent reason, your cat randomly starts batting things off of the table, and calmly watches it fall to floor. This can be a rather frustrating antic as a cat owner- but your kitty is not just trying to aggravate you, we promise.

You know what they say about cats and curiosity, well it is as simple as that- he is just curious and potentially bored! Although this is entertaining for him, you may want to try stimulating him with some new toys if you’d like to curb this naughty habit.

You head over to the sink and turn on the water faucet, only to have your cat come and take a sip from the running water. What's up with that? They have their own water bowl, why choose the faucet? 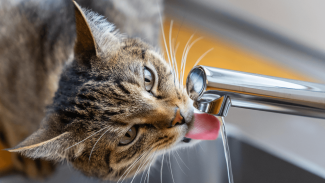 This behavior is may actually originate from your feline's wildcat ancestors.  Out in the wild, it's safer to drink from running water sources such as a river than a stagnant water source that could be home to bacteria and other contaminates. Guess your cat is just playing it safe!

You're watching your cat do her thing around the house and notice a little twitch happening around the tip of her tail. Is that normal? Yes! It absolutely is and could be a sign that your cat may be excited or focused. This usually happens when your cat is "hunting prey" around the house. Once your cat has calmed down, the tail twitching should subside as well.

Did you like this article? You may enjoy reading about how to create a cat friendly home or what makes us a gold level certified, cat friendly practice.

If you would like to book an appointment you can call us or schedule it online here.