Ivy, a 10 year old female spayed Poodle mix, came to see me after her owners noticed she was licking at a bump on her toe. The bump had been present for about 1 week.

On physical examination, there was a 1cm round, raised, ulcerated dermal mass on the top surface of the 4th digit on the right front foot at the nailbed. Dogs have 5 digits on their front feet, just like we have 5 digits on our hands. The "thumb" is called the dewclaw and is much shorter than the rest of the digits and does not touch the ground. This is called digit #1. You count outwards from there to name the digits. Some dogs have had their dewclaws removed just after birth but we still count the digits starting with the dewclaw. Ivy's mass was deeply attached at the very base of the nail and was clearly bothering her. I used a fine needle to take an aspirate of the mass to try to determine what type of mass it was in order to plan her treatment. The cytology confirmed it was a sarcoma. There are several different types of sarcomas that dogs can get but they are all malignant. Sarcomas are cancerous masses that arise from soft tissues such as muscle, connective tissues, and blood vessels. 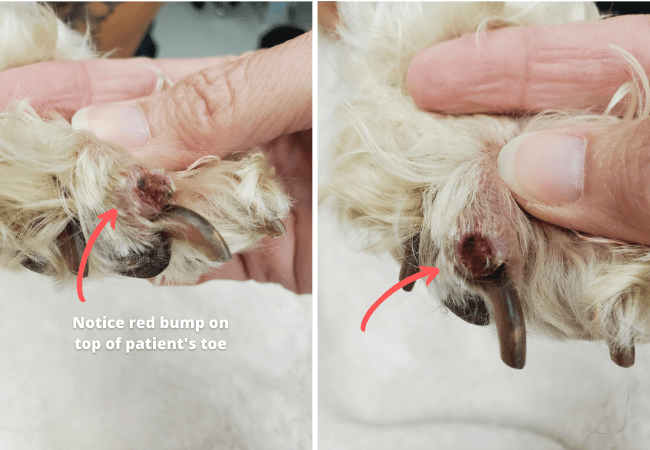 Due to the location of Ivy's mass, I recommended that we amputate the digit up to the first "knuckle" or phalangeal joint. Since we knew that the mass was malignant, we needed to get clean margins of healthy tissue around the mass to ensure adequate removal of the cancerous cells. Since the mass was attached to the nailbed itself, this could not be done without amputation. Ivy also had a complete lab panel to confirm she was healthy for anesthesia. Everything was normal and the surgery was scheduled for the following week.

Ivy was placed under general anesthesia and the entire foot was clipped and prepped for surgery. A tourniquet was placed around the leg to assist in hemostasis (control of bleeding). An incision was made around the toe to include the food pad. The digit was amputated between the first and second phalangeal joint (at the knuckle) and the skin was closed with several layers of sutures. A bandage was then placed to protect the incision since dogs can't use crutches after surgery. The owner was instructed to keep the bandage on for 4 days post-operatively and to keep the bandage clean and dry. Ivy was started on pain medications and a sedative to use as needed to keep her calm and quiet. She also had to wear an E-collar to prevent her from licking at the foot until the sutures could be removed.

Four days later, she returned to have the bandage removed.  The incision looked great!  The sutures were then removed after 12 days.  Ivy healed up nicely.  Once her hair grows back, you should not even be able to tell that she's missing a toe.  The mass was submitted for biopsy which confirmed the mass was a spindle cell sarcoma and the margins were clean of any cancerous cells.  Thankfully, sarcomas don't typically spread to lymph nodes or other organs so Ivy did not need follow up chemotherapy or other treatment.  She was cured! 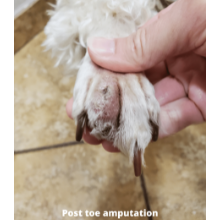 If you notice a lump or bump on your dog, be sure to have it checked out right away.  It is much easier to treat masses when they are small and we are much more likely to have a successful outcome. Need to schedule your pet's next appointment? Contact us here.