Dr. K's Case of the Month: These Hips Don't Lie

Kevin, a 1 1/2 year old male neutered Shepherd mix, came to see me for his annual check-up. During the visit his owner mentioned that she had noticed that when he got up from laying down on his pillow, he seemed a little stiff for a few steps and then seemed to "warm out of it." She didn't notice a lameness when he was on his walks, in fact, she ran 3 miles with him on most days.

As part of his physical examination, I took his legs through a range of motion and discovered that he was painful on full hip extension bilaterally. He would let out a soft yelp and pull away and look at me funny. The finding was consistent. He also seemed a bit stiff when jumping down off the bench in the exam room. He was also just a tad too skinny (and I hardly ever get to say that to clients!). I recommended that we take some sedated hip xrays to screen him for a hip abnormality that could be causing the pain. Because he was already showing me he was in pain, I didn't want to try to take the xrays without sedation and pain control. I administered an injection of a sedative and an analgesic and about 10 minutes later was relaxed and ready to move him into the xray room. I took two views--one of him laying on his back and one laying on his side for comparison. We always position our patients in a V-shaped padded trough on the xray table both for comfort but also to keep them straight and prevent twisting.

Kevin's hips were very abnormal. They hadn't formed correctly when he was growing and I diagnosed hip dysplasia bilaterally. Hip dysplasia is the term we use to describe an abnormal shape of the coxofemoral (hip) joint. The acetabulum is the C-shaped part of the pelvis where the head of the femur (thigh bone) sits. The hip is a ball and socket joint and in dogs with hip dysplasia the acetabulum is too shallow and the head of the femur does not sit tightly within the joint causing a subluxation (loosening) of the femur. The acetabulum is more L-shaped and less curved which leads to less coverage of the head of the femur. Normally at least 50% of the head of the femur is covered by the acetabulum. In Kevin's case, only about 15% was covered and it was a little worse on the left side than the right. Over time, the abnormal joint develops arthritis due to chronic inflammation caused by the malformation. Kevin already had some evidence of early arthritis starting in, even though he was so young. Arthritis looks like jagged edges and increased density on bone which should be smooth and crisp. Arthritis is the body's way of dealing with chronic inflammation. When a joint gets inflamed or irritated, it tries to limit range of motion by laying down more bone to prevent the joint from moving and causing more irritation. This then leads to pain and stiffness and decreased range of motion. If caught early enough in puppies, before their growth plates close (which is typically around 8-9 months of age), there is a surgical procedure that can be done to prevent arthritis from setting in. It is called a triple pelvic osteotomy. Kevin was too old for this procedure. There is also the option to have a total hip replacement if the dog continues to be in pain or have a significant lameness. Another surgical procedure, called a femoral head ostectomy, can be done to remove the head of the femur leaving a completely muscular joint but this is more successful in small dogs or recommended when the disease is advanced. For now, our best option was to try to prevent Kevin's arthritis from worsening through lifestyle changes and medical therapy. He may very well need a surgical procedure down the road if things progress. Hip dysplasia is hereditary, meaning it is passed down from the parents. Kevin was a rescue dog and we did not know anything about his mom or dad. 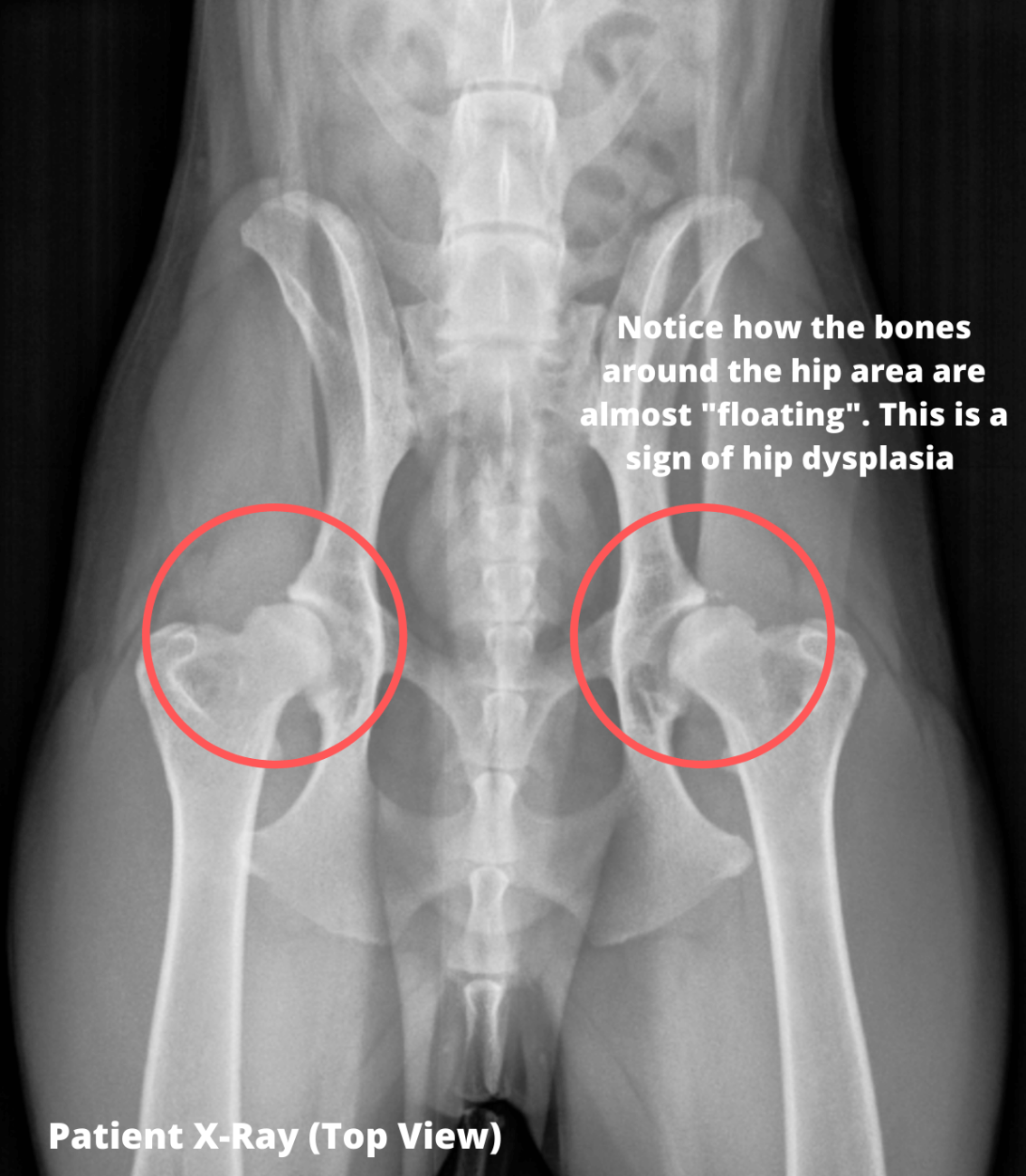 My recommendation was to stop the long distance high impact running in exchange for swimming or walking. Our goal is to keep the muscles strong and limit the pounding forces on the bones. A mainstay of arthritis prevention is weight control, so luckily Kevin was already doing well in that department. In fact, he was a little underweight. I told his owner she could increase the calories just a bit but to be sure he did not gain more than 3 pounds. I started him on a glucosamine/chondroitin supplement for joint health as well as an omega-3 fatty acid supplement which is a natural anti-inflammatory. There are also prescription dog foods available specifically made for joint health and we might consider that for Kevin as well. Another supplement called Adequan given as an injection was also suggested. I educated Kevin's owner about acupuncture, laser therapy, and physical therapy should we need to consider those in the future. Kevin will likely have flare-ups of pain if he exercises too hard or roughhouses and lands funny or tweaks himself. We should try to prevent this by limiting ball throwing, dog park play, and heavy exercise such as mountain trail hiking. Kevin's owner was sad to learn of her dog's chronic disease, especially since he was so young and in the prime of his life. But, she was thankful to know what was going on and how to prevent him from getting worse. 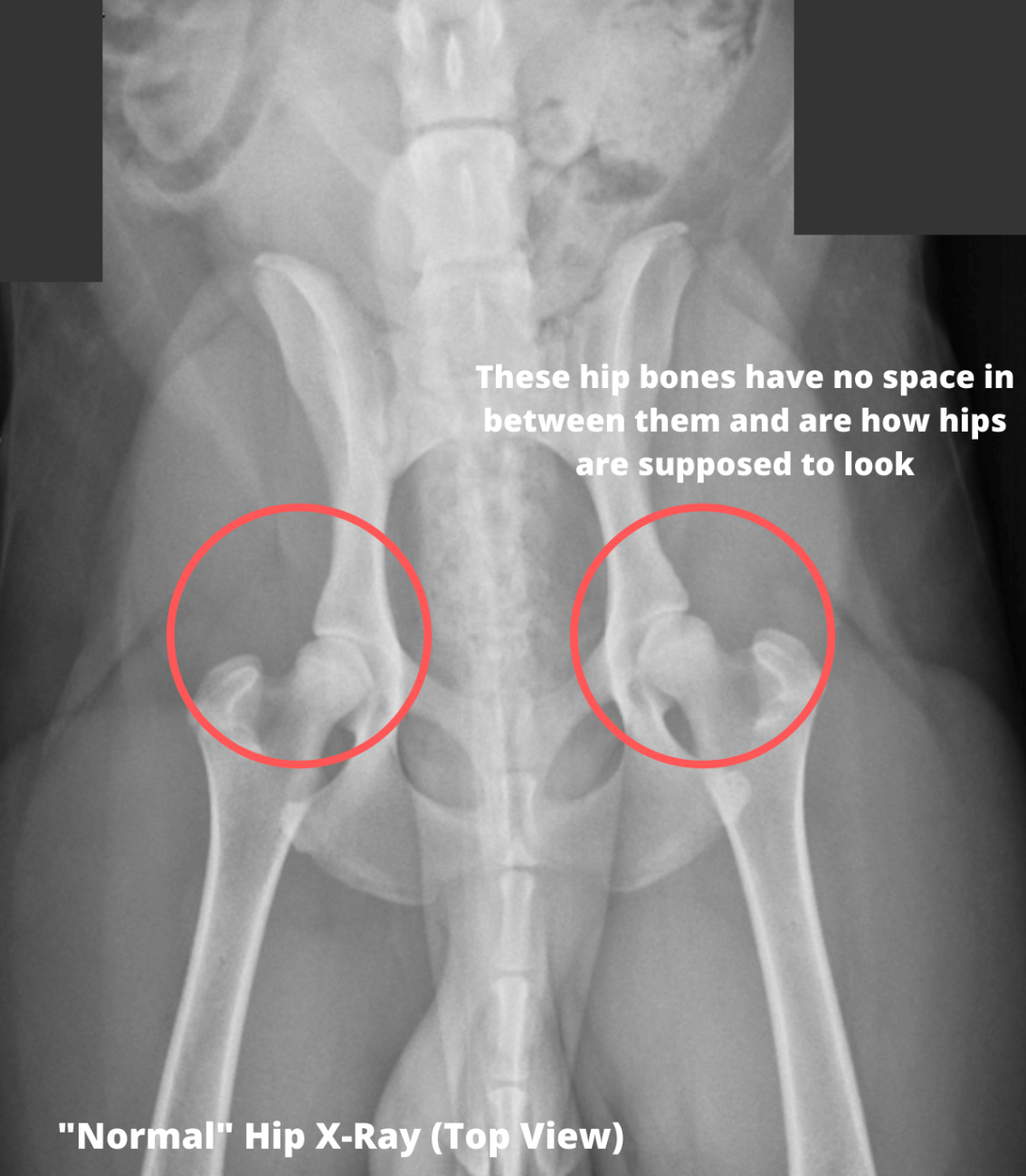 We always recommend screening hip xrays for large breed dogs at the time of neutering, ideally around 6-8 months. If caught early enough, hip dysplasia can be better managed and the outcome will be superior than if diagnosed later once arthritis has set in. If you suspect your pet may have a hip problem, or you just want to get them screened, please contact us today.

For over 30 years, The Drake Center for Veterinary Care has been serving pet owners in Encinitas, CA. The Drake Center takes pride in being a leading source of information for all pet owners across the country; however if you have any questions regarding pet care and do not live in Encinitas, CA or surrounding cities, we encourage you to contact your local veterinarian.