Dr. K's Case of the Month: The Silent Intruder

Keira, a 7 year old female spayed Husky mix, came to see me for her annual exam. The owner did not have any concerns about her health.

The patient was due for a few vaccinations and her annual heartworm and fecal tests.  The owner had conveniently brought along a stool sample which was submitted to the lab and we drew some blood for her heartworm test as well.  The following day, her results were back from the laboratory which showed a positive heartworm test.  I called the owner to ask if he had been giving her a monthly heartworm preventative medication.  He told me he had recently but had not been consistent in giving it over the years.  It had been at least 2 years since she had had a heartworm test.  He had also lived in other states besides California with Keira in the past including Georgia. 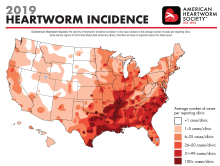 Heartworms are long noodle-like worms that live in the heart and large vessels near the heart in dogs (and sometimes cats).  They are transmitted by mosquitoes in a tiny larval form called microfilaria.  Microfilaria are microscopic “baby worms” that circulate in the dog’s blood just waiting to be sucked up by a mosquito where they complete their life cycle and become infective to a new dog.  Heartworms are parasites which cause damage to the heart and vessels and “clog up” the circulation and can lead to heart failure and respiratory disease.

I ran a few other tests on Keira to make sure she did not have any microfilaria (she did not—because the owner was currently giving a heartworm prevention), that she would be healthy enough for the treatment (she was) and that the heartworms were not causing any severe changes in her chest (they were not).  Treating heartworms is not as easy as treating an intestinal parasite where the pet will just digest the worm.  This worm lives in the cardiovascular system and is a much more delicate and time-consuming process.  There are multiple steps that need to be followed in sequence. First, Keira was started on an antibiotic for 28 days and the owner was instructed to begin exercise restriction.  As the heartworms are dying, we want to prevent dead worms from shooting out into the smaller blood vessels which can cause damage to these more fragile areas.  Keeping dogs quiet and confined is paramount in the treatment process.  Dogs need to be kept on a leash at all times, confined to a small area of the house, and should not “rough house” with other dogs.  Our goal is to keep their heart rates low.

Next, she was admitted to the hospital for one day to administer her 1st dose of Immiticide.  The medication, also known as melarsomine, is injected deep into the muscles of the lower back.  She was observed for the day and given pain control as needed.  Exercise restriction was continued—but even stricter now—and she was also started on an oral steroid for 30 days.

The following month, she was readmitted to the hospital for her 2nd and 3rd doses of Immiticide.  Exercise restriction is continued for 8 more weeks.  She was continued on her monthly heartworm prevention as well.  Dogs can get heartworms again after treatment if prevention is not given.

Nine months after the final injection, she will be tested for heartworms again.  Most dogs will test negative at this time.  If a positive test is confirmed again, treatment is begun again.

The bad news is that heartworms are not easy to treat but the good news is that they are very easy to prevent!  All dogs, no matter their life-style, should be started on heartworm prevention around 8 weeks of age and continued monthly for life.  The product we recommend is called Sentinel and it is an oral flavored chewable tablet.  There are also other oral and topical products for dogs and cats.  Heartworm preventatives kill the developing larvae in the tissues of the pet after the mosquito bites them preventing the larvae from maturing into adult worms.

Unfortunately, there is no treatment available for cats at this time but there are preventatives that we recommend for outdoor cats.  We recommend year-round prevention and annual screening for heartworm disease.  When a dog is first adopted from a shelter or rescue, they should be tested for heartworm disease right away.  Puppies under 9 months of age are just started on prevention as it takes 6 months after a mosquito bites a dog for the test to turn positive anyway.  If a dog is adopted from an area of the country with a high prevalence for heartworm disease (such as the Southeast or midWest USA) they should be tested on day 1 and 6 months later just to be sure.

Keira did well for her treatments and thankfully did not have any complications during her treatment.  Heartworms may sound like they are straight out of a science fiction novel but they are very real (and really gross!) and a huge issue in our country.  Help prevent heartworm disease in your pet today!

Fun Fact:  Did you know that coyotes, bears, tigers, lions, ferrets, and seals can all get heartworm disease too?

Need to schedule your pet’s next appointment? Contact us here.

4 Things You Should Know About Heartworms

Protecting Your Pet From Heartworms