Camper, a newly adopted male neutered mixed breed dog from Mexico, was brought in to see me for his first examination with his new owner. The family had just adopted Camper a few days before from a rescue group who brings stray, adoptable dogs into California for rehoming. The family was told that the dog was about 3 years old and had been found on the streets of Tijuana but was sweet and trusting of people. He had already been vaccinated, neutered, and microchipped through the rescue organization. 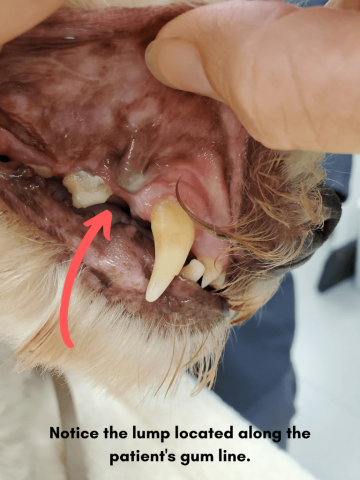 On examination, I checked his teeth and mouth and found a very firm non-painful swelling located under the gum of his upper right jaw (maxilla) just behind his large canine tooth (fang). The gum tissue was darker in appearance here with an unusual extra strip of gum attachment just above the lump. The lump was about 8mm wide and Camper didn't care when I touched it or pushed on it. He also had significant dental disease including heavy tartar, gingivitis, gingival recession, and root exposure of a few teeth. He was very well behaved for his oral exam. I told the owner that I thought Camper was older than 3 years due to the degree of dental disease but of course I could not prove this...he was keeping his age a secret. I recommended a dental cleaning under anesthesia to further assess the lump but also to take dental xrays to fully assess his oral health.

A few weeks later, I anesthetized Camper for his dental prophylaxis, also known as a Complete Oral Health Assessment and Treatment (COHAT). During a COHAT, the pet has an intravenous (IV) catheter placed and receives IV fluids. He is also connected to an anesthetic monitor which records the pulse, EKG, body temperature, breathing rate, CO2 level, and blood pressure. A technician is continuously monitoring the pet at all times. A second technician is performing full dental radiography (xrays) to image the bone, roots, and crowns of the teeth as well as scaling each surface of every tooth with an ultrasonic scaler and finishing with a polishing paste. Camper's xrays revealed some surprises! 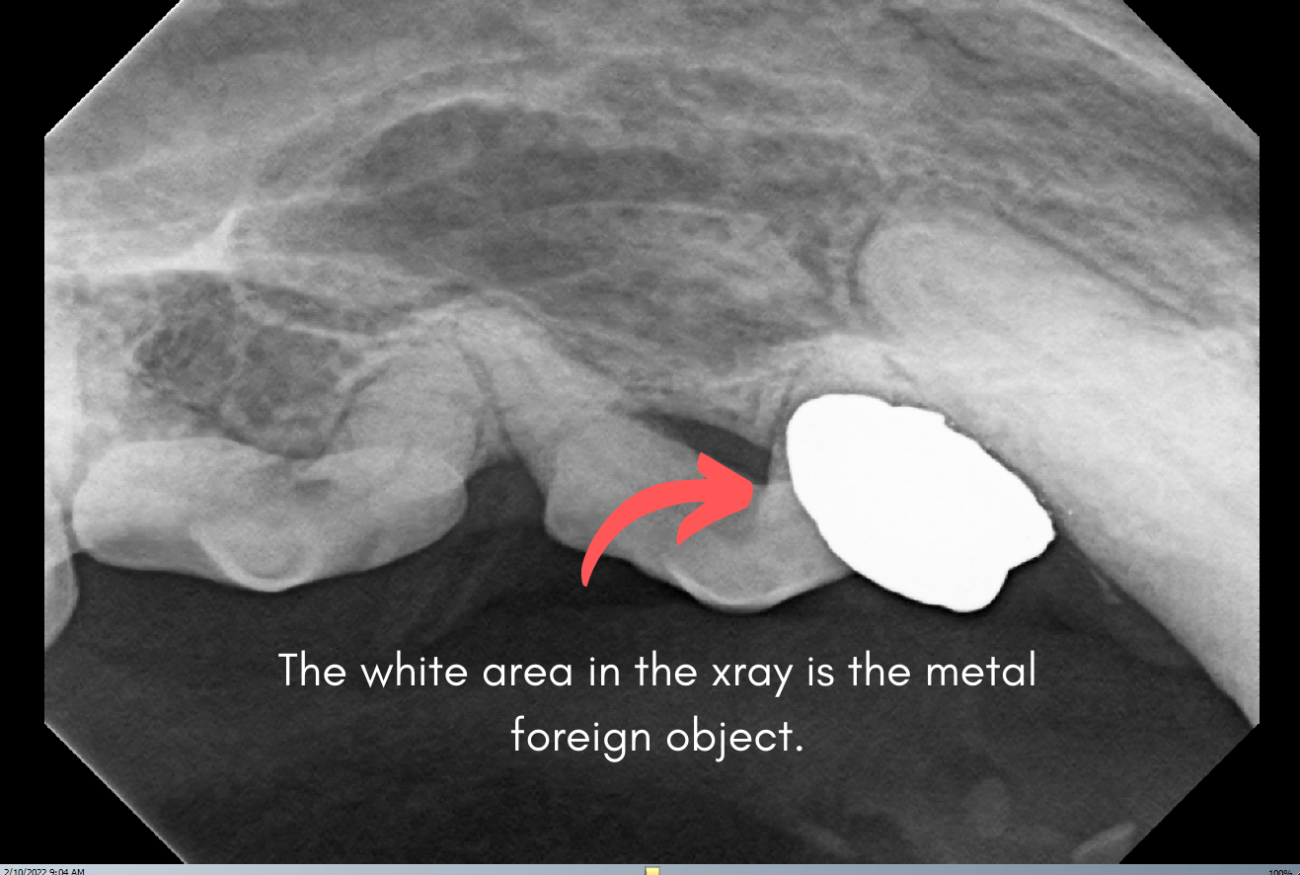 The firm lump turned out to be a metal foreign object as you can see in this xray. Metal shows up bright white on xray as the xray beam cannot penetrate metal. I made an incision directly over the foreign body with a scalpel blade and used a dental elevator to remove it. Can you guess what it was??? A bullet! 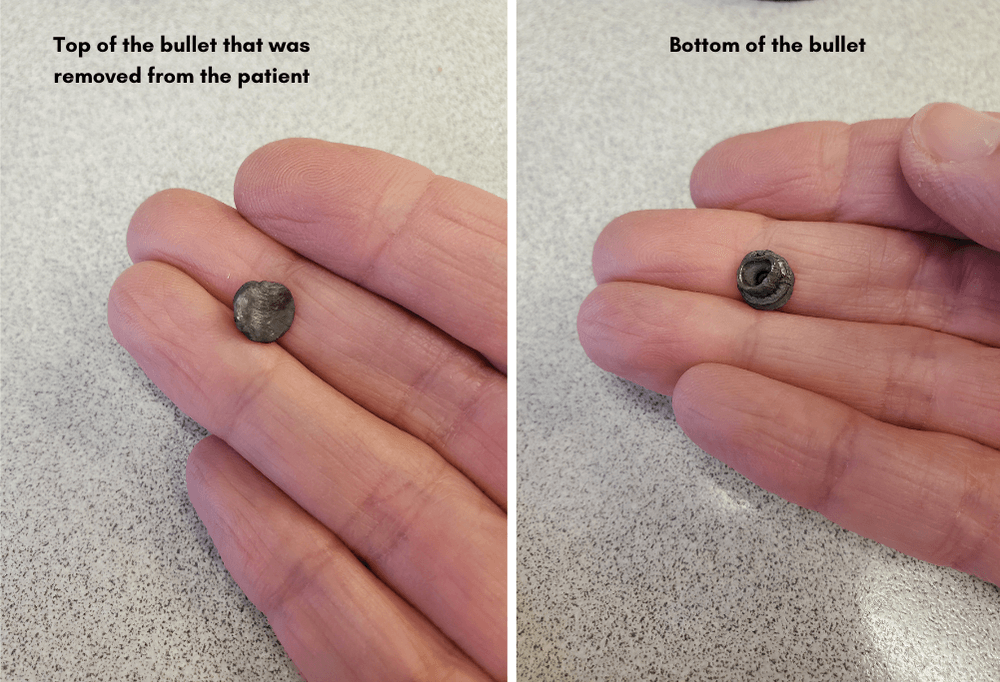 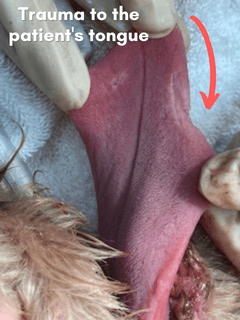 Poor Camper had been shot in the face and the bullet had lodged in his jaw bone. Thankfully, it had not done major damage to the surrounding teeth or sinus. His body had covered the metal bullet with gum tissue to close the defect. No one knows how long the bullet had been lodged there but it also caused some mild damage to the tongue at the time of injury. A small portion of the right side of Camper's tongue was missing.

He also had 10 diseased teeth that I extracted which included teeth that were infected, loose, and decayed. The dental disease was not caused by the bullet but related to periodontal disease from lack of oral hygiene and proper nutrition in his previous life in Mexico. 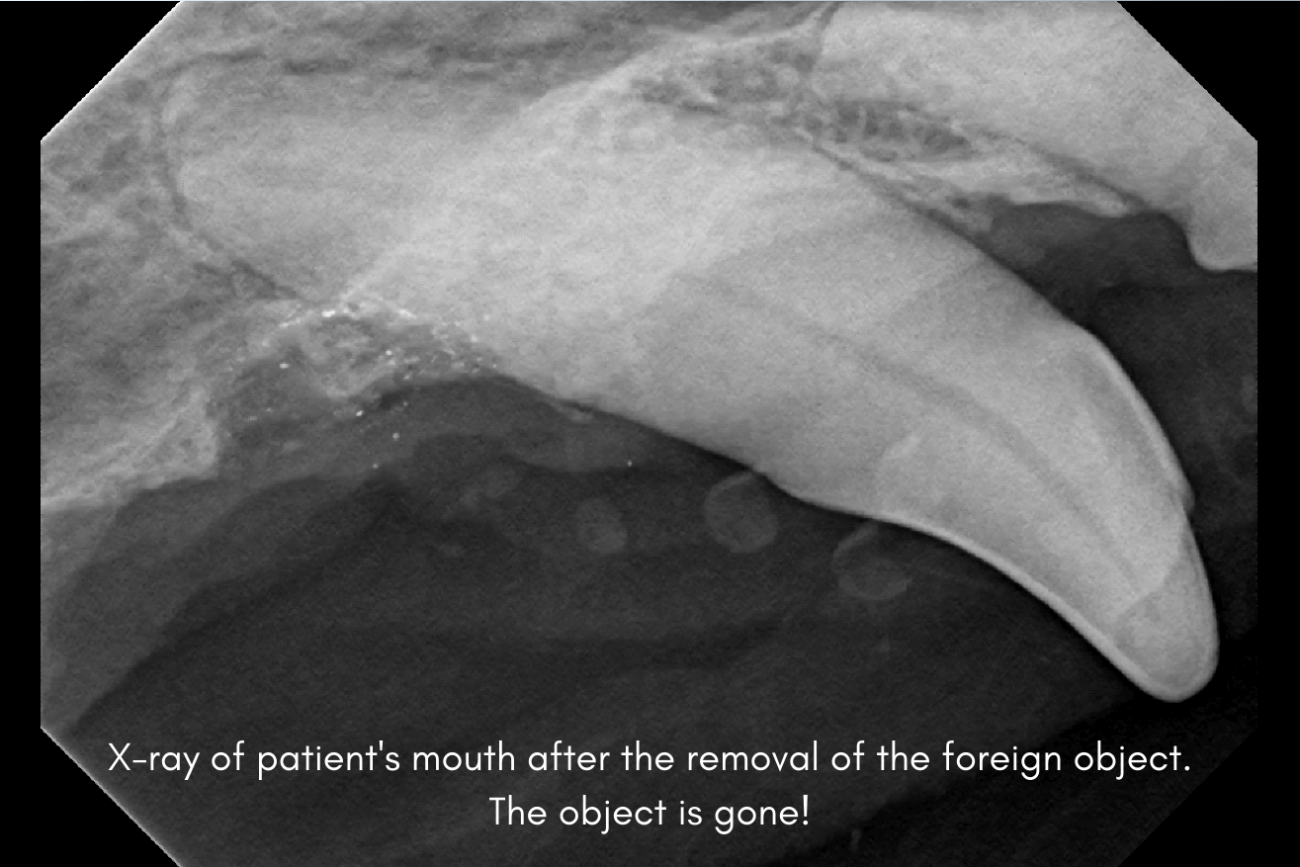 Camper did very well for his procedure and was feeling good as new a few days later. He is so lucky to have found a wonderful family who loves him dearly and will surely be spoiling him for the rest of his precious life. Camper sure has some stories to tell....if he could only talk

If you need to schedule your pet's next appointment, contact us here.

The Drake Center for Veterinary Care, an AAHA-accredited animal hospital located in Encinitas, CA, has been serving their community for over 30 years. The Drake Center loves being a source of information for all pet owners across the country however if you have any questions regarding pet care and do not live in Encinitas, CA or surrounding cities, we encourage you to contact your local veterinarian.