Rusty, an 8 year old male Springer Spaniel, presented to me for getting into some chocolate cocoa powder.

He had been home alone for about 3 hours and when the owners returned home, they found him looking very dirty, like he had been digging in the dirt.  They quickly determined that he had found a canister of unsweetened baking cocoa on the kitchen counter and had a little party.  He had knocked it off, opened the lid, spilled it on the floor, and eaten an unknown quantity of the powder that was now all over his snout, chest, and front feet.  He was also acting very hyper, running around and had even run into the wall.  They immediately brought him in to see me. 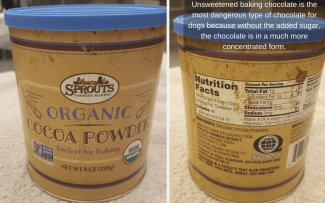 On presentation, Rusty was agitated, had an elevated heart rate, and had slight muscle tremors.  I immediately gave him an injection of an emetic to induce vomiting.  Decontaminating the stomach is vital to removing the majority of the toxin to prevent further absorption.  Since we had no idea how much chocolate he had consumed, we had to assume the worst case scenario.  Chocolate has several toxic ingredients for dogs and can cause mild symptoms if only a small amount is ingested (such as vomiting and diarrhea) or severe symptoms if a large amount is ingested (seizures and even death).  Based on Rusty's symptoms, we determined that he had ingested a moderate amount for his body weight.  He was able to vomit a good amount of liquid chocolate.  After he stopped vomiting, he was then administered activated charcoal by mouth which is a bonding agent to help stop the digested chocolate from continuing to be absorbed.  Dogs recirculate the toxins absorbed from the chocolate from their intestine back into their liver (enterohepatic recirculation) which is why it can have lasting effects if not treated quickly.  Rusty was monitored for several hours to ensure that his symptoms began to improve.  At the time of his discharge, his heart rate had slowed and he seemed less agitated.  He was released to his owners with instructions to keep him in a small space, only offer small amounts of water and food at a time to prevent vomiting up the charcoal, and to expect very black stools as the charcoal moved through his gut for the next 24-48 hours. 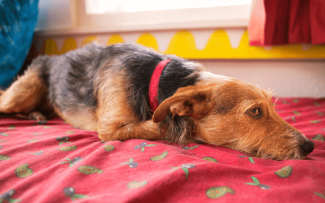 Thankfully, Rusty made a full recovery by the next morning.  Often times, dogs need to be hospitalized on intravenous (IV) fluids for a day or two to completely rid their system of the toxins.  Unsweetened baking chocolate is the most dangerous type of chocolate for dogs because without the added sugar, the chocolate is in a much more concentrated form.  The darker the chocolate, the more dangerous too.  It is very important to keep all chocolate up high in the cupboard and away from our dogs.  Just like us, they think it tastes pretty yummy too and have no idea that it is bad for them.

If your pet ingests something they shouldn't have or you need to set up your pet's next appointment, please contact us here.