Dr. K's Case of the Month: The Squeaky Kitten

Ebony, a 3 month old male domestic shorthair kitten, came to see me for not feeling well. He was lethargic, not eating, and making a funny respiratory noise.

On physical exam, he was mildly dehydrated, a bit underweight, depressed, and making a funny little wheezing noise with every breath. I had to put his chest up to my ear to really hear what was going on. Every time he breathed in (inspiration) there was a squeaky noise coming from his chest. He did not have any upper respiratory congestion or discharge and was not sneezing but he did cough a few times. He had a low grade fever and had lost 1/2 pound since his previous wellness exam. I recommended taking some chest xrays to see what was going on in his lungs. The xrays revealed that Ebony had severe pneumonia (lung infection). His lungs were consolidated in certain areas instead of being clear and full of air. I suspected that Ebony had vomited for some reason and a little bit of the vomit had gone "down the wrong pipe" into his lungs to set up the infection. This is known as aspiration pneumonia. Ebony's owner had 2 other kittens at home and they were all healthy so this didn't seem to be some type of contagious viral infection. 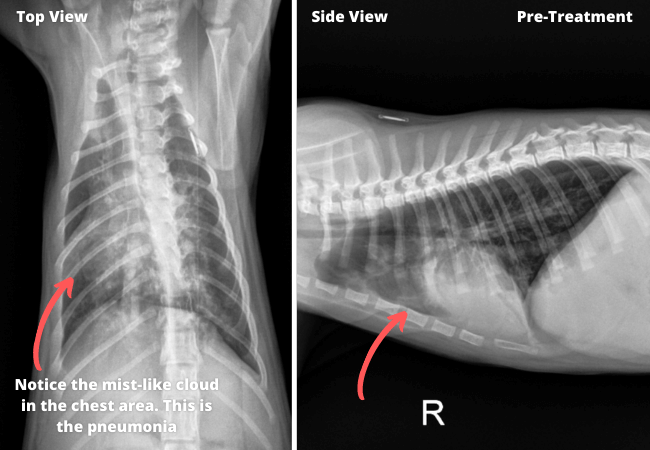 I started Ebony on an antibiotic, administered some fluids under his skin for hydration, started an appetite stimulant and instructed the owner to use a humidifier in his room. I also told her to take him into the bathroom with her when she showered so he could breathe in the humid air followed by tapping on the sides of his chest with cupped hands to try to release any phlegm from the lungs. This is called nebulization and coupage and can be helpful in cases of pneumonia. Ebony responded very well to the treatments. 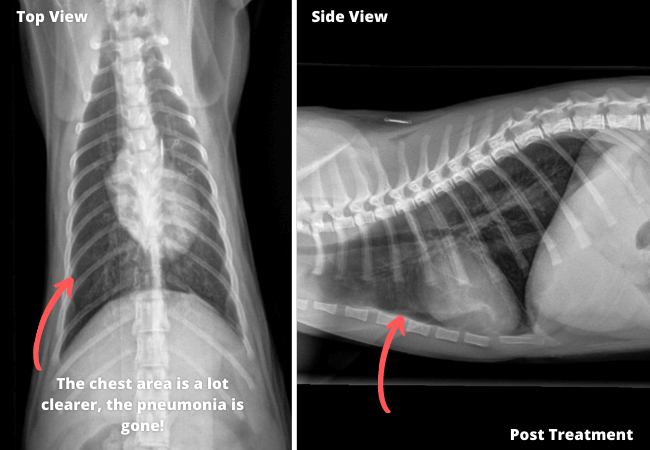 I rechecked him 2 weeks later and repeated some xrays. He had gained 1 pound, was feeling much better, was eating well, and was no longer making the funny squeak. His xrays looked dramatically improved! Ebony went on to make a full recovery and is now enjoying his youth and playing with his kitten friends.

Need to set up your pet's net appointment? Contact us here.

For over 30 years, The Drake Center for Veterinary Care has been serving pet owners in Encinitas, CA. The Drake Center takes pride in being a leading source of information for all pet owners across the country; however if you have any questions regarding pet care and do not live in Encinitas, CA or surrounding cities, we encourage you to contact your local veterinarian.