Dr. K's Case of the Month: All Tied Up

Royal, a 4 year old spayed female domestic medium hair cat, came to see me after she had spent the night vomiting and now was not eating.

On presentation, she was bright and alert and did not appear dehydrated.  She had a soft comfortable abdomen, was a few pounds overweight, and had mild dental disease.  Her owner said she had vomited at least 10 times during the night which was very unusual and did not want to eat breakfast, also very unusual for her.  I recommended taking some x-rays of her abdomen to assess her stomach and intestines.  The x-rays revealed a very full stomach which looked to contain foreign material in long thin strips.  The intestines and other structures were all normal.  After so much vomiting and not eating since, the stomach should be empty.  Upon questioning Royal's owner, she mentioned that Royal had a fascination with her hair ties (elastic bands) and liked to play with them and sometimes she presumed her cat might have swallowed them as she couldn't find them afterwards.  No hair ties were missing recently, though.  I recommended immediate surgery for Royal to remove the foreign material from her stomach. 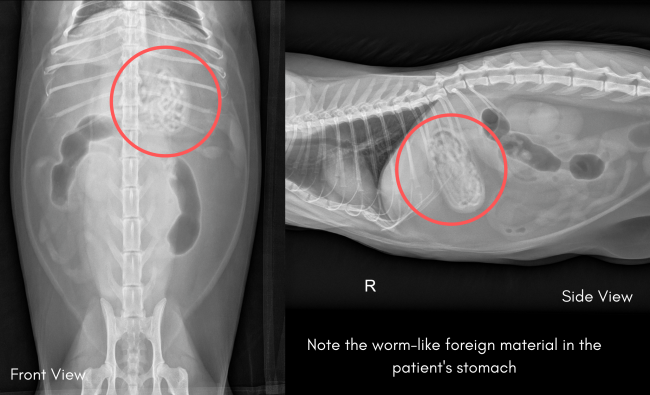 Royal was placed under general anesthesia after confirming her bloodwork was normal.  The surgery, called a gastrotomy, entails opening the abdomen, isolating the stomach, incising into the stomach, removing all the foreign material, followed by closing the stomach and flushing the abdominal cavity with sterile saline.  Royal had ingested at least 15 hair ties and other linear objects such as dental floss and string.  The material was all balled up and tangled together in her stomach which led to an obstruction.  The material had been accumulating over the course of several months, which is why the owner didn't really notice the slow disappearance of her belongings.  The stomach had finally reached its capacity and could no longer process food. 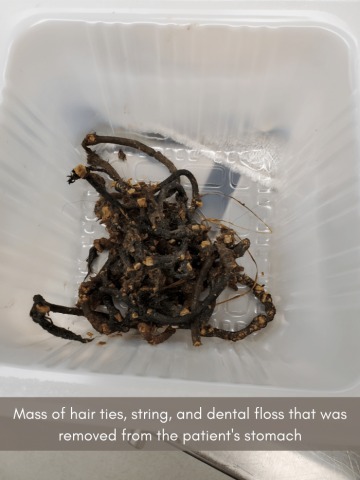 Royal was lucky none of the material had passed into the small intestine as this can be much more dangerous as linear objects move through the narrow curves of the bowel.  Royal recovered uneventfully from her surgery and was discharged to her owner later that evening.  She was sent home with pain control, an antibiotic, and an E-collar to prevent licking of the incision.  She healed very quickly.  The owner was instructed to ensure she did not leave hair ties or other string-like objects out for Royal to play with in the future.

We aren't quite sure why some cats seem to like the taste of these non-food items, but they can be very dangerous to cats!  If you suspect your pet may have eaten something he or she shouldn't have or is vomiting or not eating, please call us immediately.