These foxtails are everywhere right now. We've had so much great rain, which we appreciate, but it has created a plethora of fox tails everywhere. I want you all to be aware of how dangerous these are for your pets.

Hi, this is Dr. Drake, and this is Cici Hamlet, Dr. Hamlet's very cute dog who's a little nervous right now because she's afraid of these things behind me, which are called fox tails. These foxtails are everywhere right now. We've had so much great rain, which we appreciate, but it has created a plethora of fox tails everywhere. I want you all to be aware of how dangerous these are for your pets.

When you're out taking hikes, if you could avoid these at all cost, these terrible little things have this sharp, pointy edge, which it can go in your dog's nose, in their ears, and especially between their toes. The best way to avoid them is to stay on the middle of the trail. Avoid letting your dog go off the trail for two reasons, fox tails and snakes also. We're just seeing lots of rattlesnake bites. If you could, when you're done doing your hike, wherever it is, just check between their toes.

If you are on a hike and your dog starts to sneeze violently, it probably means one went up the nose, and you have to go to your veterinarian. You have to come in and see us and let us look for that fox tail. If they're holding their head like this, it means one probably went into their ear. That's a pretty painful situation that needs to be taken care of right away. Then the last possibility is if one gets in between the toes, it does take a while before it enters the skin, so check the toes. But if you forget for some reason or you missed one, they'll start to migrate up between the toes, and the dog will start to lick the foot. If they're really going after their foot, we probably need to see them for that, too.

Besides just being really painful for a dog, if it goes up the nose or gets in the ear, if these things do enter the foot or they enter in the skin somewhere, they can actually migrate in through the body wall and get into the lungs. We've actually had dogs have to have major lung surgery and have part of their lung removed from these foxtails. While they seem benign, they're really not. Check your dog. Stay close, stay on the middle of the trail, and if you see any issues at all, please bring them in so we can take care of that before it becomes a problem.

Foxtails are annual grasses that are common in weedy areas around roads, paths and fields. These grasses are soft and green during the first few months of the year (January through April). In late spring, however, the heads begin to dry, creating a threat to your pet during the summer and fall.

Photo: Raita Futo Flickr
There are more than 40 species of foxtails around North America. Most species have dense, cylindrical, often brush-like flower clusters that resemble the bushy tails of foxes. The heads have sharp points at one end and several microscopic barbs. These barbs allow the head to easily move in the direction of the point, but not the opposite direction. Foxtails can slip easily into holes, like ears and noses, but the tiny barbs make them difficult to pull out.
Foxtails cause problems for dogs and outdoor cats. If your pet has long or thick hair, foxtails embedded in the coat will eventually burrow through the skin and into the body. For pets with short hair, foxtails get started in between the toes and burrow into the feet.
Keep an eye on the following common foxtail problems:
If your pet shows any of the above symptoms, schedule an appointment immediately. 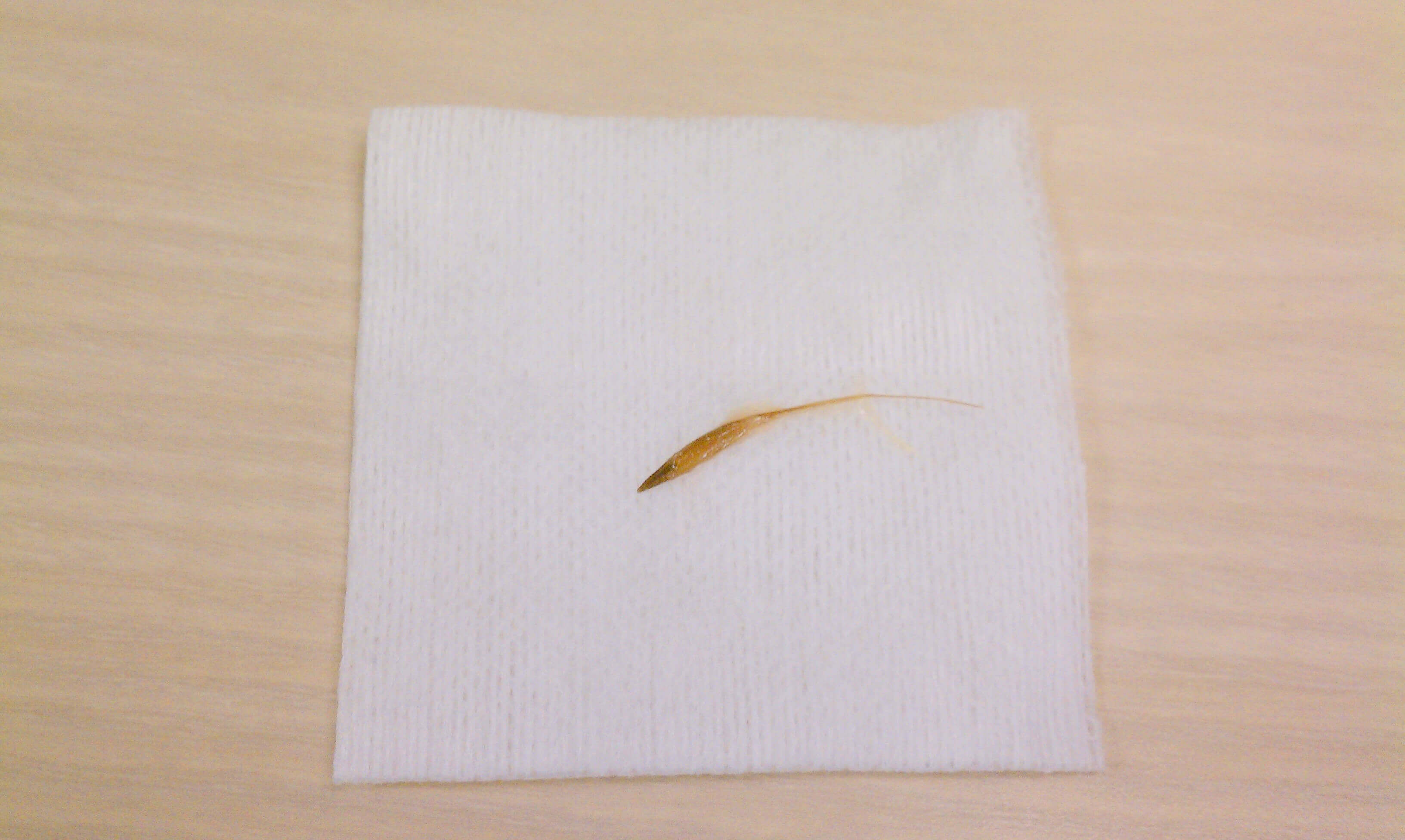 In addition to causing pain, localized abscesses and infection, foxtails can migrate and lodge in the lungs and other internal organs, making major surgery necessary. Even then, foxtails don’t show up on X-rays and are sometimes impossible to surgically locate and remove.
Prevention goes a long way